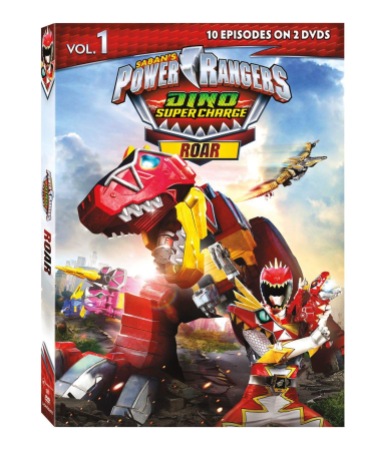 Power Rangers Dino Super Charge may be nearing its end, but Lionsgate Home Entertainment is just warming up with the season’s first DVD coming in an all-new format.

Now featuring 10 episodes as opposed to the usual 4, the first DVD, titled ‘Roar’ will release on January 10, 2017 at an estimated retail price of roughly $15.

Fans can check out the official box art above, and press release below.

OFFICIAL SYNOPSIS
The Power Rangers continue their search for the Energems after Sledge’s defeat, but soon learn that his most dangerous prisoner, the evil Heckyl, survived! In light of this new threat, Kendall creates a powerful new Dino Charger that unlocks the Red Ranger’s T-Rex Super Charge mode! It will take every Zord, Megazord, and Dino Charger in the Power Rangers’ arsenal to finally unite all ten Energems and save the universe!